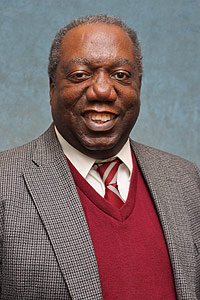 Professor of Leadership and Christian Ministries

Dr. Richard L.  Rick Gray is professor of Leadership and Christian Ministries. He is currently the Leadership department chair at Asbury Theological Seminary. In 2008 he received the Asbury Seminary Graduate Faculty Discipleship and Mentoring Award.

Dr. Gray is the executive director of the Obsidian Society (African American Evangelical Scholars Organization) and president of Evening Star Enterprise, Inc., a publishing endeavor. He is currently on the advisory board for Urban Impact in Lexington, Ky., and conducts workshops on topics ranging from African-American history to youth ministry throughout the area. He has published numerous books, including his most recent, The Journal of African American Christian Thought (UMI Publishing, 2008). In addition to his books, he is currently writing a leadership in ministry course for Asbury College.

Dr. Gray and his wife, Coral, have two children.