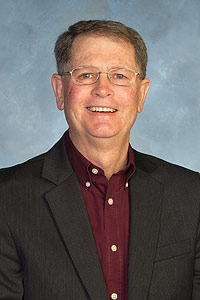 Dr. Stephen Seamands is professor of Christian Doctrine. He has served as a professor at Asbury Theological Seminary since 1983.

Dr. Seamands was the 2005-2006 recipient of the Excellence in Teaching and Learning Award at Asbury Seminary. His book, Ministry in the Image of God: The Trinitarian Shape of Christian Service (InterVarsity Press, 2005), received the 2006 Christianity Today  Award of Merit for books in the area of church and pastoral leadership.

In addition to teaching and working with seminary students, Dr. Seamands is actively engaged in leading seminars and retreats and conducting spiritual renewal events in local churches across the United States. He has a particular interest in theological and spiritual renewal within the United Methodist church, as well as the larger body of Christ. He also has a deep concern for the spiritual needs of pastors and Christian leaders.

His workshops,  The Healing Power of Forgiveness and  Overcoming Barriers to Experiencing God’s Love, which he has presented at scores of churches and conferences, have ministered deeply to the brokenness in people’s lives. He is regularly involved in what he describes as a  ministry of healing prayer to seminary students.

Dr. Seamands and his wife, Carol, have four children and eight grandchildren.