President Thomas Jefferson exemplified the scholarly, masterful gardener. He determined to find, propagate, and share useful plants from around the world that could stabilize our fledgling agriculture and delight our eyes and palate. Have fun growing the very strains that he grew, some even procured from Monticello itself. 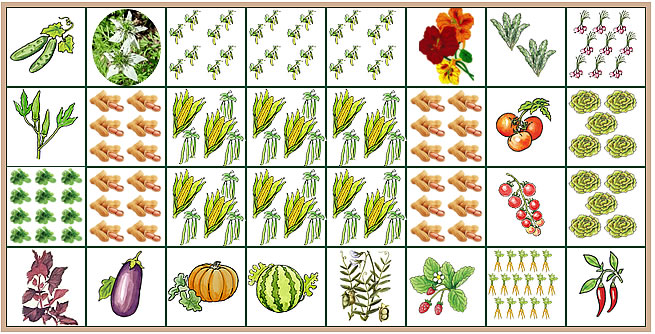 President Jefferson kept a pickle barrel at his residence in Washington D.C. to offer to guests. He especially appreciated the long season of the gherkin and recommended it to his brother.

Known by many different names, Nigella sativa pleases the eye and the palate. Its feathery fronds, delicate flowers, and tasty, aromatic seed make it a multi-purpose plant. President Jefferson began growing it at Monticello in 1810. The seeds of this hardy annual are sprinkled on cakes and bread and spice Indian and Middle Eastern curries, vegetables, and bean dishes. Both naan bread and Armenian string cheese benefit from its flavor, an intriguing blend similar to onion, black pepper, and oregano. According to Nestlé, it also has use in reducing allergic reactions to food.

Apparently, President Jefferson encouraged a spring tradition among his neighbors, competing for the earliest crop of peas. The winner hosted a dinner party for all the rest featuring the prize peas as the centerpiece. Mr. Jefferson delighted in trying many different varieties, and below, you will find some of the most popular.

Easy-to-grow and with multi-colored blooms, nasturtium makes a delightful surprise in salad. The leaves, flowers, and seeds are all edible and lend a peppery flavor to foods. Thomas Jefferson pickled the immature pods and seeds for use as capers.

Also called Tuscan kale, black kale, or dinosaur kale, Lacinato kale contains a powerhouse of nutrients and withstands cold temperatures very well. In Tuscany, it is popular in thick, hearty stews, often made with extra ingredients from the previous day’s dinner. Another delicious way to serve Lacinato kale is to massage it with lemon juice, olive oil, salt, and Parmesan for a fresh salad. Superb! Even the kids gobble it up.

President Jefferson’s discovery of the “tree onion” offered the benefit of having onions steadily available for harvest. Extremely cold temperatures leave tree onions unharmed, and they make a nice addition to other perennial favorites, like rhubarb and asparagus. They form small bulbs under ground and a cluster of bulbs at the top of their stalk that will eventually sprout, bend over, and plant itself in the soil – thus, its other name, the Egyptian walking onion. Every part is edible.

A later addition to Thomas Jefferson’s garden, okra originated in Africa. Its large, handsome flowers make you look twice. For a real treat, try an authentic old-style recipe for gumbo or Mary Randolph’s other recipe for “Ocra and Tomatas.”

Both Presidents Thomas Jefferson and Jimmy Carter farmed peanuts. Peanuts can be eaten, raw, roasted, boiled, or in beverages. Called groundnuts by the African residents of Kalas Village, this plant can be truly multi-purpose. George Washington Carver promoted its use by low-income families who desperately needed the nutrition and diversity it could offer both in edible, soil-building, and household uses (105 food recipes and about 100 farm and household products).

Once you harvest your first homegrown ears, try the president’s recipe for fresh corn pudding.

Oddly enough, tomatoes were not a commonly popular vegetable in Thomas Jefferson’s time. They were spurned for their sensual appearance and strong scent when brushing up against the foliage. However, President Jefferson did not let this deter him, and the fruit/vegetable made a regular appearance on his table and even in court (where the case of the vegetable fruit was determined to be a vegetable for legal taxation purposes and a fruit for botanical classification).

Most of the vegetable varieties had disappeared from Monticello by the late 1900s. However, a gardener who truly appreciated the Jeffersonian cultivation of foods, Peter Hatch, made it his personal mission to bring back as many of the president’s vegetable varieties as possible. The National Center for Genetic Resources Preservation sent Mr. Hatch the president’s favorite lettuce, “Tennis Ball,” which he preferred for its ease of care.

Mr. Jefferson suggested sowing a thimble-full of lettuces every Monday and radishes every other week during the growing season, so he would never be without his salad. His usual, flavorful mix included corn salad, nasturtium, endive, orach, and fresh sesame oil. For this and other meals created by the president’s staff, see this article.

Orach makes a stunning contrast to the green of a basic salad. Its taste is pleasant, and its appearance in the bowl is even more pleasing.

If your children do not like eggplant, they would be delighted to learn that during Thomas Jefferson’s time it was thought to cause bad breath, leprosy, cancer or even insanity! He ignored these whisperings, however, and cultivated both the purple and white varieties. You will likely find it a palate-pleaser both fried, like the president ate, and caramelized.

The Black Futsu squash has a rich hazelnut flavor with good insect resistance. Both presidents Washington and Jefferson grew many varieties of “pumpkin,” adopted from the Native Americans. Thomas Jefferson consumed a portion of his bounty in gumbo soup flavored with bacon.

Because they are small, these very sweet, highly perfumed “Pineapple” melons are ideal for cultivation on a trellis. The unripe melons can be pickled or candied, while the ripe fruits present the perfect size for single-serving dessert cups. The sweet, spicy, and aromatic Green Nutmeg melon was also grown by President Jefferson and is an early producer.

A French priest introduced lentils to the United States, via the Iroquois tribe of Native Americans in the 18th century. They were then later cultivated by Virginia farmers and the soon-to-be president himself. Americans still have yet to take full advantage of this healthful food and eat only 1/20th of the amount eaten by the average Asian Indian per year.

President Jefferson appreciated this plant so much that he told President Monroe it was one of the three objects with which he should enrich our country. Included in this design as a novelty, since Mr. Jefferson later stated it needs to be grown in quantity in a field to yield enough for a bowl, nonetheless, they yield a delightful flavor when fully ripe.

An attractive form of cayenne pepper, African-American cooks commonly used the fish pepper in their seafood recipes or for drying into a spicy chili powder.