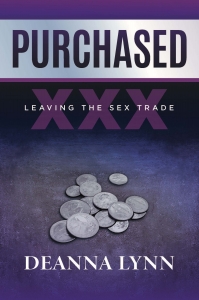 mna, Deanna Lynn, has published a brand new book: a raw telling of her journey through abuse, addiction, the sex industry, and the crippling pain that nearly laid her low…until Jesus ransomed her from that life and started her on a journey through becoming whole. Now living a redeemed and resurrected life, she advocates for women who have been through similar trials through Refuge for Women, the organization that helped her find new life. [If you or a woman you know is being sexually exploited and needs help, you can find it here.] 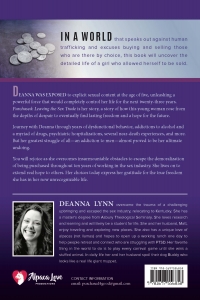 Alumni Office Coordinator, Patricia Grace Seabolt, has been reading this boldly truthful story, and had this to say:

“The incredible courage it took to write this raw and honest depiction of Deanna’s life is absolutely reflective of her character. It couldn’t have been easy, but she knew it was needful. Her story validates women who have been through similar trauma and helps them not feel so alone. It helps those who do not understand to see the truth of the sex trade and how the women involved are in bondage and not really as ‘consenting’ as they seem. This book transforms the topic and helps people see the lives Jesus seeks to ransom rather than the dehumanized ’cause’ humanity has turned it into. The book has been an engaging, eye-opening, and important read.”

A brief synopsis of the book, provided by the author:

Have you ever wondered how someone can get stuck in a life of selling sex?

Deanna wanted to model or become an actress. She basically wanted to do anything where someone would notice her. Growing up with an alcoholic and suicidal mom who used sex as a weapon for manipulation, she learned early on the extreme ways it would take to be noticed and perhaps one day even be loved. She entered into statewide bikini competitions and modeled lingerie in local restaurants and that’s where she met him.

At 18 years old and already an addict and alcoholic, a man sat at a table in the restaurant with free shots of alcohol and asked if she wanted to model for local ads. Only within weeks, more alcohol and drugs were being provided, more money was being offered, and she was asked how far she would go to maintain this life. It wasn’t long before he put her up in a hotel and sent one person after another every half an hour into her room. She reached a point where she would shove her head into a pillow and cry, as they continued with what they came for. Some nights she would lock them out and hide until they would go away.

Most girls think, I will just do a few movies and get out. Pay for college, buy a car, get noticed for a while. Well, Deanna spent ten years trying to make her way back out, with the attention being more addictive then the drugs. A few performances turned into hundreds. She became noticed alright. She was followed in her poor decisions, stalked at shows and at work, and even the parts of her life she wanted to protect to this day still get exposed. She saw porn take a man from his family in Georgia to her office in California only to find out his addiction ran so deep that he committed suicide in front of his wife who asked him to unplug the computers. The sex industry told her she was in too far; she would never be able to do anything else with her life. She saw many people leave and come back reinforcing this lie.

Deanna is glad to say it was just that. It was a lie. She began to seek the truth and the truth set her free. She is thirteen years sober, nine years removed from the sex industry, and is married to a wonderful man she met at seminary. She graduated with her master’s degree from Asbury Theological Seminary and is working towards her Doctor of Ministry requirements. She is happy to share with others the decisions that gave her life. Decisions she made that seem unnatural to the flesh and counterintuitive to how she was raised both as a child and as someone brainwashed by the industry. Those intentional decisions are what keep her free.

Deanna has recently published her book, Purchased: Leaving the Sex Trade. In a world that speaks out against human trafficking and excuses buying and selling those who are there by choice, this book will uncover the detailed life of a girl who allowed herself to be sold. Choice is not a simple matter when the choice is derived from decades of compounding trauma and addictions. She hopes to educate culture in a way that encourages us to stop buying sex in all forms and to instead honor one another as a whole being. This is not an easy read, but it’s an honest one that depicts chaos that leads to selling one’s self. If there is hope for her, no one is too far gone.