Our heartfelt congratulations to Ricardo Gómez on being names Distinguished Alumnus 2020! More about Ricardo: 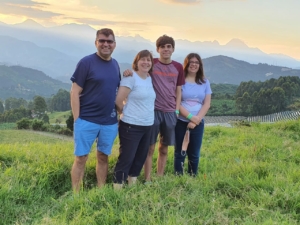 Ricardo Gómez graduated from Asbury Theological Seminary in 2003 with a MA in Theological Studies. He graduated again in 2007 with a PhD in Intercultural Studies. While at Asbury, Ricardo married a Kentucky native, Beth Absher, and they had two children, Juliana & Jonathan.

Originally from Colombia, Ricardo received his call from God in 1998 to come to the US to receive the tools he needed to better serve the people of Latin America. Upon his graduation from Asbury Theological Seminary in 2007, the Gómez family moved to Santiago, Chile as missionaries through Free Methodist World Missions. In addition to coordinating Pastoral Education for Free Methodists throughout the region, they planted an urban church in Santiago. In 2013, the family moved to Medellín, Colombia where Ricardo continued his Pastoral Education role with the mission and taught part-time at the Biblical Seminary of Colombia (FUSBC) where he had previously earned a bachelor’s degree in Pastoral Studies in 1998. In 2018, Ricardo led a team of 25 people from 5 countries to write and distribute a 19-course curriculum for Pastoral Formation in Spanish that is used throughout the region and is being adopted by Latino pastors in the US. In 2019, Ricardo was named the Area Director for Latin America for the Free Methodist Church, which includes oversight of US missionaries plus local leaders in 16 countries.

Ricardo is deeply thankful for his Asbury education and formation. It has shaped the way that he does ministry, particularly with the implementation of international accountability groups throughout the Free Methodist Church in Latin America. In appreciation for Asbury’s service to him, Ricardo has continued to serve the institution in various ways…as an adjunct professor in the distance learning program, on the alumni-council and currently as a member of the Board of Trustees. Ricardo published his dissertation “The Mission of God in Latin America” (Emeth Press, 2010), and he and his wife co-authored a chapter in “Global Voices: Stories of Church Planting from Around the World” (Asbury Theological Seminary, 2019).