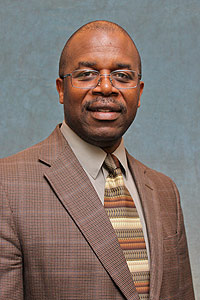 Professor of Philosophy of Christian Religion

While he was a student at Asbury Seminary, he earned the Frank Bateman Stanger award for excellence in preaching and the Philosophy and Christian apologetics award. Dr. Okello has served as a pastor and choral director at Africa Inland Church. He has published several articles and books, including Revisiting God: A Commonsense Approach to Theism (Xulon Press, 2008).

In addition to his duties at Asbury Seminary, he is also an adjunct instructor at Asbury College and the University of Kentucky.

He is married to Sophia.