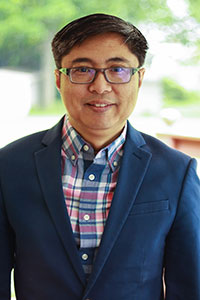 Dr. Luther Oconer has served on the faculty and was the director of the Center for Evangelical United Brethren Heritage at United Theological Seminary in Dayton, Ohio since 2012. He teaches on the area of United Methodist studies, the Holiness Movement, Pentecostal/ Charismatic Movement, and church renewal. He completed his Ph.D. in Wesleyan/Methodist Studies from Drew University in 2009. He is also the First Vice President of the Wesleyan Theological Society, current editor of the Wesleyan Journal for Religious Studies, and is an ordained elder in The United Methodist Church in the Philippines.

He has written several book chapters and journal articles on the history of global Methodism, the intersection between revival and missions, and the connections between Methodism and Pentecostalism. In 2017, he published his book, Spirit-Filled Protestantism: Holiness-Pentecostal Revivals and the Making of Filipino Methodist Identity. It was awarded the Wesleyan Theological Society’s Timothy L. Smith and Mildred Bangs Wynkoop Book of the Year Award in 2018.

Dr. Oconer is passionate about promoting revival in churches and seeing them renewed by the power of the Holy Spirit. He regularly preaches in renewal conferences and lead workshops on divine healing in the U. S., and internationally. He has also served churches in the Philippines, New Jersey, and Alaska. He is married to Marion and they have two children, Ilana and Wesley.