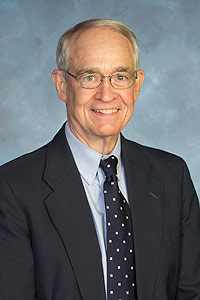 Dr. J. Steven O’Malley is the John T. Seamands Professor of Methodist Holiness History. He is also the director of the Center for the Study of World Christian Revitalization Movements at Asbury Theological Seminary, which received a research grant in 2007 from the Henry Luce Foundation.

Dr. O’Malley has pastoral experience in Connecticut, South Dakota, Austria and Kentucky. He has been a lecturer and guest speaker at United Methodist seminaries and universities and was the opening convocation preacher at Garrett Evangelical Seminary in 2007. In 1999, he was also the Bell Visiting Professor in the Graduate School, Drew University. From 1977 to 1983, he served as the first professor of church history at the School of Theology at Oral Roberts University, where in 1982 he was named outstanding faculty member. In 2007, he received the distinguished scholar award from United Theological Seminary.

Dr. O’Malley has written, edited and translated numerous books, studies and articles. His latest book is Forthcoming: Pentecost and the New Humanity (2009, Scarecrow). This past year he has led a variety of devotionals, as well as written several articles.

He and his wife, Angie, have two daughters.