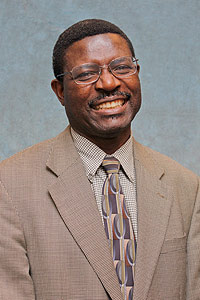 The Rev. Dr. Tapiwa N. Mucherera is professor in Pastoral Counseling. He joined Asbury Theological Seminary’s faculty in 1999 on the Wilmore campus. In 2006, he was asked to move to the Florida Dunnam Campus to help head the starting of the MA Counseling (MAMH, MAMF, & MAPC) degrees.

Dr. Mucherera is an ordained United Methodist Minister in full connection with the Zimbabwe West Annual Conference. He is also an Affiliate member of the Florida United Methodist Annual conference where he serves on the Board of Ordained Ministry. He has served churches in Zimbabwe, Chicago, Iowa, Denver and Kentucky. Some of Dr. Mucherera’s passions are in doing workshops with pastors on self-care, and seminars on marriage and family issues. He also has a heart for ministering and supporting those orphaned by the HIV/AIDS pandemics especially in Africa,and Zimbabwe in particular. Dr. Mucherera worked as an individual and family therapist before joining the Asbury Seminary faculty.

He and his wife Bertha have three children, Shamiso, Anesu and Ruvimbo.