This ongoing series spotlights the enduring legacy of Dr. Robert Traina. A pioneer and champion of Inductive Bible Study (formerly taught as English Bible), Traina inspired countless Asbury Seminary students to become better readers of the Bible, and in so doing, equipped them “to spread scriptural holiness throughout the world.” You can read Part One of the Traina Legacy series here, and Part Two here. This content has been graciously provided by The Word Is Out ministry, which seeks to achieve biblical literacy across the globe and to highlight and appreciate the enduring legacy of Bob Traina and his commitment to faithful reading of the Word.

David recalls as a small boy—a toddler, really—listening with his head against his father’s chest to the proclamation of the Word on Sunday morning. For the Bauer family, church was a central part of life, and the Bible was a central part of church. Even at such a young age, David was keenly aware that something of dynamic power was happening in the preaching of the Word. Leaving church, he remembers walking past and gazing at the pulpit—mesmerized by the power of the preaching to shape a community of people.

Dr. Bauer and his son, Chris.

He observed something different about members of his family and their church family, something qualitatively distinct from most other people, something much better that was tremendously appealing, nurturing, and attractive. It would perhaps come as no surprise, then, that in his teens David would begin thinking of his ultimate vocation and the possibility of embracing Christian ministry as such.

Feeling a strong calling to pastoral ministry, he chose a college that he felt would best prepare him for that calling. The choice was Spring Arbor College (now Spring Arbor University) in Michigan, which David chose largely because of its biblical curriculum. He had long assumed that study of the Scriptures would be central to his preparation, and as he began comparing Bible instruction among various colleges, he found himself drawn to Spring Arbor where study of the Bible was a study by “books” of the Bible more so than topics found in or applied to the Bible. He had a deep sense that studying the Bible by “books” was more in keeping with the Bible itself than an approach that dealt with broad topics.

It was at Spring Arbor that David met Bible professor W. Ralph Thompson, who would become one of the most influential people in the young man’s life. 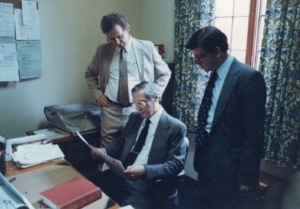 David was immediately drawn to Thompson. No one David had known was more Christlike than Thompson: although brilliant (fluent in six or seven languages and having eight earned degrees), he was arguably the humblest person David had ever met. It was in Ralph Thompson that David sensed the direct connection between the study of Scripture and character—Scripture, properly studied, has “the power to shape us into people who are truly Godly, who are truly Christlike: different from others in the world and able to make a significant difference in their worlds.”

Under Thompson, David became acquainted with inductive study of Scripture. Although Thompson at the time of his own seminary studies at The Biblical Seminary in New York was an older adult with experience as a missionary in the Caribbean, he nevertheless became a student of and was profoundly impacted by an instructor younger than himself: Robert Traina. It was in an upper-level class taught by Thompson that David first encountered Traina’s groundbreaking work, Methodical Bible Study, and that experience figured largely in David’s decision to attend Asbury Theological seminary, where Traina had by then been teaching for some time. 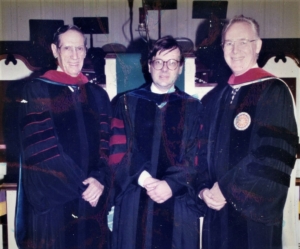 Drs. Traina, Bauer, and Kingsbury on the occasion of the inauguration of the Ralph Waldo Beeson Chair of Inductive Biblical Studies.

“I remember in the first or second class that I had with Dr. Traina a couple of students sitting in front of me. As the class was ending, one of the students leaned over and said to the other student, ‘Can you believe this?’ And the other student responded, ‘No, but I’m glad I’m here!’” David goes on: “And that really captured the excitement of sitting under the Inductive Bible Study teaching of Dr. Robert Traina.”

He describes Traina as a “master teacher” with a brilliant mind and a myriad of natural and spiritual gifts. “The thing that was truly powerful about Traina’s classes was, and I’m using this word deliberately, the unleashing of the Word of God—approaching the Bible, observing it,  interpreting and applying the Bible in deep and profound ways. It was really the beauty and power of the Word let loose, allowed to speak on its own terms, that was truly transformative.”

It was during his time as Traina’s student that David began observing Traina’s pedagogy and felt increasingly a call to theological education, specifically in the area of Biblical studies, and even more specifically a calling to Inductive Bible Study. It was at the feet of Traina that David recognized the great potential this approach to studying the Bible has for the church and, through the church, for the world. “Any abilities I have today I owe to the modeling of Traina. I maintain an enthusiastic passion to participate in that.”

That passion has led David to thirty-five years of faithful teaching at Asbury Seminary, and to the conclusion that the power of the Word applies even to those who teach it.

“Some years ago, I was invited to be the Bible teacher at a camp meeting in Michigan, and they asked me the last Sunday morning of camp to preach the Sunday morning service. And I did. I preached on the parable of the pounds from Luke’s Gospel—a sermon that had to do with risk taking. 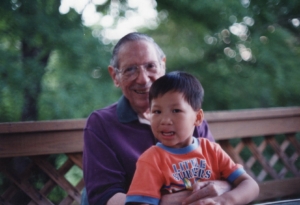 “I fell under conviction of my own preaching,” he goes on to say, “and my sense was as I was preaching this that the Word was convicting me that I was not taking risks, that I had made an idolatry of comfort, and comfortableness, and safety. For some reason on the drive back to Kentucky from Michigan later that Sunday, a thought came to my mind of adopting a special needs, international child; that this would be a way of moving outside my ‘comfort zone’ and taking a risk that I sensed that perhaps God wanted me to take.”

Describing himself as well advanced in years at the time and single, David didn’t think it would be possible for him to do such a thing. Nevertheless, he “went about the process of adopting the child who is now my son and everything just fell into place. Now a teenager, he has just been a joy for me, and is a strong, Christian young man—very gifted and a great delight.”

He offers this to all of us: “I encourage you to take seriously the inductive approach to the study of the Bible. And I can assure you that as you hear the Scripture on its own terms through this approach that is very intentional in allowing the Bible to speak on its own terms, you’re going to have what Oletta Wald referred to as ‘a joy of discovery in Bible study.””

—Dr. David R. Bauer is the Ralph Waldo Beeson Professor of Inductive Biblical Studies and Dean of the School of Biblical Interpretation on the Kentucky campus of Asbury Theological Seminary. He also serves as a member the advisory board of The Word Is Out (www.thewordisout.com), a global ministry committed to equipping pastors and lay people with Inductive Bible Study Skills. He lives in Wilmore, Kentucky, with his son, Christopher.