This ongoing series spotlights the enduring legacy of Dr. Robert Traina. A pioneer and champion of Inductive Bible Study (formerly taught as English Bible), Traina inspired countless Asbury Seminary students to become better readers of the Bible, and in so doing, equipped them “to spread scriptural holiness throughout the world.” You can read Dr. Brad Johnson’s Part One of the Traina Legacy series here. This content has been graciously provided by The Word Is Out ministry, which seeks to achieve biblical literacy across the globe and to highlight and appreciate the enduring legacy of Bob Traina and his commitment to faithful reading of the Word.

The Journey to Asbury

In 1970, a young Billy Abraham persuaded his wife, Muriel (who was expecting their first child) to leave their family and Irish homeland to cross the Atlantic with plans to study at Asbury Seminary. The encouragement came from Rev. Shaun Cleland—himself a former student of Asbury Seminary and a minister whom Irish Methodism called to Billy’s home church. Billy recalls how Cleland (who was responsible for Billy’s conversion to Christianity) spoke so “winsomely” about Asbury. He goes on to say that he then “got a hold of Alan [Meenan, his best friend] and said, ‘Why don’t we both apply?’ And both of us got in. The rest is history.” That decision would lead not only to what he calls “three of the best years of my life,” but also to an exceptionally distinguished career in service to the church and the academy.

But the young travelers remained undaunted, successfully navigating flights (one of which was by helicopter) to their final destination of Wilmore, Kentucky. Billy remembers that they couldn’t even make tea because they didn’t have a teapot. Fortunately, a gracious young couple next door in Broadhurst Manor “took us under their wing.” Although they had to use a saucepan to make it, the Abrahams enjoyed their first cup of tea on U.S. soil. 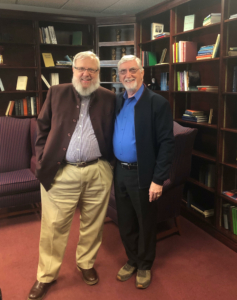 Billy and Alan arrived on campus a few days after the semester had already started, missing those crucial first few days of class. Especially for Greek, it was “tough catching up.” But they did indeed catch up and both were immediately captivated by one professor in particular: Robert Traina. Billy says about his professor, “Traina was very much the figure who captured our imaginations, captured our hearts and our minds. He became an absolutely crucial figure in terms of my formation and long-haul impact. It was a remarkable, remarkable period.”

Each class with Traina was packed—and it was always in one of the biggest classrooms. “Your mind was bursting with curiosity and questions.”  Just two weeks or so into the course, students began placing psychological peer pressure on other students not to ask questions of their professor during class. “We shut down the questions because we wanted to hear Traina on these texts.” So students set up outside sessions for Traina to address their questions, “and of course he generously did that.”

In Billy’s last year of seminary, he learned that Traina drove weekly to the Abbey of Gethsemane to teach there. Wanting all of his mentor’s time he could muster, Billy asked to join him. That began a weekly encounter along those seventy miles of Kentucky highways in which Billy formed a relationship with Dr. Traina, gaining new insights to him “not just as lecturer or professor, but at a very personal level. Of course, what struck me about him was the extraordinary integrity of the man.”

Traina’s influence on the young Irishman would have a lasting impact. Billy describes the “incredible independence” his professor gave him as a student. Further, “Traina gave me confidence about reading the Scriptures which was irreplaceable. I’ve carried this over into the other areas that I have written in and read in, and while there are unique features of reading Scripture, the idea that there is a general hermeneutic here that applies across the board in the reading of literature is as solid as ever.”

Many of us are familiar with the enormous contribution Billy has made to Methodism. Dr. David Bauer says this about him: “[He] is one of the leading systematic theologians in the evangelical world, and is arguably the most creative and insightful theologian in evangelical Wesleyanism today.  He combines biblical, theological, and philosophical insights into a holistic vision of the Christian faith in today’s world.”

Despite being a much sought-after speaker and prolific writer (among his most recent publications is his four-volume work, Divine Agency and Divine Action, by Oxford University Press), and in true Traina fashion, Billy has never lost touch with the practical application of knowledge. “I have for the last thirty years taught what I call ‘Blue Collar Exegesis,’” which he describes as two hours of inductive Bible study at a coffee shop on Saturday mornings in preparation for Sunday school at his church.

Billy adds, “Just talking about him brings back the most precious memories and enormous sense of debt that I owe him—and affection.”

The aim of this series of articles is to highlight and appreciate the enduring legacy of Bob Traina and his commitment to faithful reading of the Word. In subsequent issues, we’ll meet and hear from his students. Their testimonies to the profound impact of IBS on their own lives and lives of their students and parishioners will astonish you.