This is the fourth installment in a series. You can read the previous articles here:

Although a self-described “wee fella’ from Belfast,” Alan Meenan was a somebody on his university campus. Having come to a saving knowledge of Jesus in his teens, Alan became the president of the university’s Christian Union despite having had no family upbringing in the church or formal training in matters of faith. And even though he was engrossed with trying to understand the Bible, he found himself standing on campus with his young colleagues much more advanced in their Christian maturation than himself. At times he would observe them in conversation about the Bible, sharing things that blew his mind.

Things reached a head when a “smart alec law student” confronted him: “I understand you’re a Christian.”

The law student was quick to attack: “So how could you follow a person who couldn’t get a miracle right the first time?”

Alan timidly responded, “What do you mean?”

Dr. Alan Meenan, professor and founder of The Word is Out.

Alan reports, “I had no idea how to answer the question, since I had never read that or heard about it before. It was a knockdown blow for this wee fella’. That smart alec law student left this Christian sprawling on the floor and walked away triumphant because I couldn’t answer the question”—and this in spite of the fact that he was the president of the student Christian Union. Chalk one up for the atheists.

This encounter understandably disturbed him—so much so that Alan embarked on a quest to understand Mark’s inclusion of a story that brought Jesus into disrepute. “To be honest, I didn’t like Mark…I cursed him. Why would Mark show Jesus up in such a bad light?”

Seeking answers, he found that no one—not his youth leaders, not even his preacher—could help him with this dilemma. Here he was, in his early 20s, befuddled by the Bible. “So what do you do in such a case—give up faith?”

After a few years, he forgot about the crisis, placing it in the category of “mysteries we can’t explain” (as Christians sometimes tend to do). But then something happened when he decided to pursue master’s studies at Asbury Seminary in Kentucky with his life-long friend, Billy Abraham.

It was at Asbury Seminary that Alan met Dr. Robert Traina, Professor of English Bible (now known as Inductive Bible Study). Alan signed up for this first class with Traina, who just happened to be working through the Gospel of Mark. Traina directed his students to the first unit of Mark 8 (vv. 1-10 where Jesus feeds the 4,000). He then pointed out that Mark follows this miracle with the account of the Pharisees demanding a sign (vv. 11-13). On the heels of this demand, Mark relates the disciples’ concern over not having bread for their jaunt across the Sea of Galilee. Using this occasion, Jesus asks his disciples, “Having eyes do you not see, and having ears do you not hear?” He then teaches his disciples to beware of the leaven of the Pharisees (vv. 14-21).

Skipping just ahead for a moment, Traina masterfully directed his students’ attention to a later section in Mark 8—Peter’s confession of Christ (vv. 27-30). Jesus asks his disciples, “Who do people say that I am?” They respond with good answers, but none that were quite correct: “And they told him, ‘John the Baptist; and others say, Elijah; and others, one of the prophets.’” Jesus then turns to Peter and asks, “But who do you say that I am?” Without hesitation, Peter gives the winning answer: “YOU ARE THE CHRIST.”

Traina then put this question to his students: “So what explains the movement from ‘unseeing’ to ‘seeing’ for the disciples?” The answer, he suggested, lay in the middle—in the text between the episodes. Mark included the double-take healing of the blind man in 8:22-26 precisely to illustrate how the disciples (and by extension, we as the readers) sometimes need a second touch. Alan shares, “This illustrates a profound truth, that the disciples had eyes, but couldn’t see clearly—but eventually they were able to see clearly that he was the Christ.”

Traina’s careful attention not just to the words of Mark but also to its structure revealed the genius behind Mark’s writing. “Sitting in the classroom, I felt the tears welling up in my eyes. I so desperately wanted to go back to that smart alec student and say, ‘You idiot!’”

Traina set Alan on a journey that has transformed his life by turning it upside down. “He has shown me how to see the Bible in a remarkably new way.” The Gospel of Mark is now one of Alan’s favorite books.

A Legacy of Teaching and Preaching 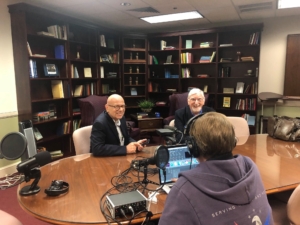 Following his studies at Asbury (where he took every course with Traina that he could), Alan went on to do doctoral studies at the University of Edinburgh in Scotland, earning a PhD in Old Testament. From there, he did postdoctoral research at Yale University with Brevard Childs, eventually taking a pastoral role at and revitalizing a declining church in Richmond, Virginia. (Coincidentally, it was at this church in Richmond where Alan would later meet a young doctoral student at Union Theological Seminary named David Bauer. The two would become life-long friends.)

It was also at this church that Alan would have an epiphany of sorts. One Sunday morning during worship, he invited the congregation to turn to the book of Zephaniah. They stared at him blankly. “Is there a book of Zephaniah in the Bible?” he could almost hear them mutter. Then he realized how impoverished his people were with regard to the treasures of Scripture. So, he began a Wednesday night Bible study introducing them to the inductive study principles he had learned from Traina. Attendance was meager, largely because of other, more traditional Bible studies that were simultaneously being offered.

From there, Alan took an appointment at a church in Southern California where he began to refine and further develop his Bible study materials. The church began promoting this new, two-hour study on Wednesday nights, even purchasing ads on the local radio station. Soon, more people were attending the Wednesday night study than were in worship on Sunday mornings.

After a few years, Alan received an invitation to serve as the pastor of a large downtown church in Amarillo, Texas. Continuing to develop his materials, he soon saw an average weekly attendance of over 300 participants for his Wednesday night inductive study of Scripture. And after a few more years, Alan was called to serve at First Presbyterian Church in Hollywood, California, following the legendary Lloyd Ogilvie. Thinking no one would fight rush hour traffic in Los Angeles to come to a Wednesday night study, he initially declined requests to offer one. But yielding under relentless encouragement to do so, he began adding even more material to the study, eventually producing a curriculum of twelve, 10-week courses spanning the entire contents of the Bible.

More than 700 people were showing up on Wednesday nights, including at one time—according to Alan’s reports—“the entire cast of the Days of Our Lives” daytime drama. Word got out about Alan’s teaching Scripture by means of Traina’s methodical approach, and soon he was being invited to speak and teach not just around the country, but also around the world.

In 2005, Alan left Hollywood Presbyterian and focused his energies on a new work that has come to be known as The Word Is Out. In partnership with a church plant in Glendale, California, The Word Is Out has begun establishing training centers aimed at helping pastors and lay people become better readers of the Bible. The first such center is in full operation in Lusaka, Zambia (more on that in a forthcoming article!) under the leadership of Asbury alum, Rev. Lael Zulu, and another one is in the works for the nation of Myanmar that will be developed by Asbury alumnus, Carol Lin.

Alan’s goal is to make the Bible as accessible and understandable as possible. “If this really is God’s Word (and, of course, it is), then there’s nothing else in the world more important than understanding it aright.” Hear more from Alan on his free podcast.

–Dr. Alan J. Meenan is an Adjunct Professor for Asbury Seminary, teaching Inductive Bible Study. He is also the founder and president of The Word Is Out, a global ministry committed to equipping pastors and lay people with Inductive Bible Study Skills. He currently lives in Northern Ireland.