This is the fifth installment in a series. You can read the previous articles here:

It was the start of the fall semester when I entered Royal Auditorium on the Kentucky campus of Asbury Seminary. A large group of students was assembling for their first encounter with New Testament Greek. As I moved to the front of the room to begin class, I unpacked my rolling briefcase just as I had routinely done for the previous seven years: laptop, power cord, lecture notes, required textbooks, and an attendance roster. I began working my way through the roster, finally coming to the last name on the list. That name was Sam Lael Mwase Zulu.

I stumbled slightly over the name, and Rev. Lael Zulu gently corrected me. I was immediately struck by his presence. His warm, rich voice and articulate speech suggested a regal quality. I was quickly drawn to him. Lael went on to distinguish himself in that class by doing exemplary work, and even more so, by pressing me for “more” at every turn. His appetite for Greek was insatiable, and his capacity to retain and comprehend the nuances of language was uncommon. The relationship that grew from that experience has been anything but routine.

Six years later, I stepped off a plane at the Kenneth Kaunda International Airport in Lusaka, Zambia. It was my first trip to Africa, and the furthest from home I had ever been—by a stretch. I was at that time becoming involved with The Word Is Out, a ministry that champions biblical literacy through Inductive Bible Study (IBS). My trip to Zambia was in response to an invitation by Lael and The Word Is Out to speak at a pastors’ conference.

After clearing customs and making my way to ground transportation late that night, I caught sight of Lael and a colleague waiting for me. The joy of that reunion was indescribably sweet.

Lael was sensitive to my circumstance and transported me directly to my hotel. He suggested that I rest the following morning and assured me that we would visit later that afternoon to discuss details of the upcoming conference with him and his team.

Lael, Susan, and little Leorah Zulu at the 2019 Conference, Exposition and Seminar on Inductive Bible Study in Lusaka, Zambia. Shown with the Zulus is Brad Johnson.

Having left his home in 2004 to attend Back to the Bible Training College in Mpumalanga, South Africa, Lael found a hunger to better understand God’s word and to share it with others. As he was considering options to further his education, he came upon a copy of Charisma magazine featuring an advertisement by Asbury Seminary. He was most interested in the possibility of studying there, but after applying realized that he did not have the funds available for such a commitment.

His interest in and talents for ministry did not escape notice, though, for Archbishop Peter Ndhlovu of the Bible Gospel Church in Africa appointed Lael to lead a church in Ndola (north of Lusaka in the Copperbelt province) shortly after Lael’s graduation from Bible college. Serendipitously, it was during this time that Lael met his wife-to-be, Susan, who was working for Archbishop Ndhlovu.

In 2008, Dr. Alan Meenan, Asbury alum and founder of The Word Is Out, was invited to speak at a conference for a pastors’ fellowship network in Ndola at a university near Lael’s church. For five days, Lael soaked up the teaching of this gifted pastor-scholar who opened Scripture to those in attendance by means of IBS. Lael’s appetite for understanding Scripture grew even more.

Just two years later, Alan returned to Zambia and this time Lael seized the opportunity to get to know Alan. As the two spent time together, Alan came to realize that Lael possessed exceptional aptitude for IBS. After much conversation and prayerful consideration, Lael accepted Alan’s invitation to become a global “champion” for The Word Is Out. In so doing, Lael acquired the support he needed for he and Susan to come to the U.S. to study at Asbury Seminary. The funding for Lael’s education and living expenses were provided through the establishment of a Memorandum of Understanding between Asbury Seminary and The Word Is Out.

In December 2015, Lael graduated from Asbury Seminary with an M.A. in Biblical Studies (and with his first and only experience of snow!). As a global “champion” for The Word Is Out, Lael was sent to establish a training center for pastors and lay persons desiring to learn Inductive Bible Study. Combining intellectual firepower, administrative savvy, and a pastoral spirit, Lael established the International Center for Biblical Understanding in Lusaka. Beginning in 2016, he has hosted an annual conference introducing the principles of IBS and demonstrating its fruitfulness.

That conference has grown, and Lael now provides year-round training for pastors and lay people at his center. Inductive Bible Study, as pioneered and developed by former Asbury professor, Dr. Robert Traina, sits as the foundation of that work. 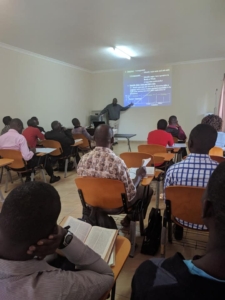 In His Own Words

“I have neither personally met Dr. Robert A. Traina,” Lael reports, “nor have I sat in any of his Methodical Bible Study classes or lectures: but it seems that his life, his lecturing, and his legacy are evident in the lives of his students, and I have in mind, Dr. Alan J. Meenan and Dr. David R. Bauer who at one time where mentored by Traina at Asbury Theological Seminary. Above and beyond, I was fortunate enough to learn from these two the Inductive Bible Study lessons that Traina passed on to them. Similarly, it is these two individuals from whom I have learned so much about Traina and his methodical Bible study techniques, which is now called Inductive Bible Study.”

Lael is a consummate student of IBS as taught by Traina’s students, Alan Meenan and David Bauer. In addition to studying and teaching the Bauer and Traina textbook on IBS, Lael watches recorded lectures of Traina that are archived in the B. L. Fisher Library and available online.

“The audio and video lectures have taught me something about Traina; he had a deep passion for Inductive Bible Study, the same devotion I see in Alan Meenan and David Bauer. I must hasten to say this: Dr. Traina’s method or approach to methodological Bible study has positively impacted my life in my understanding of the Bible. Moreover, his methodology of studying the Bible is practically enriching and leads to practical guidance in the original, accurate, precise, and penetrating study of the Bible. Besides, IBS is a helpful method that helps one be accurate and specific in interpreting the scripture.” 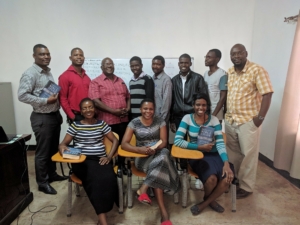 Rev. Zulu and some of his IBS students, who are learning from the book by Drs. Traina and Bauer.

The afternoon I spent with Lael and his team in preparation for the conference was a seismic event for me—so much so that it will be the topic of next month’s article. But for now, I want to say this: I watched Lael deploy his team to lead and present at a conference for Zambians hungry to know God’s Word better. During the proceedings, Lael was clearly at the helm. However, his leadership was not in any way autocratic or self-advancing. Instead, he often observed from the sidelines, appearing up front only as needed and rising to answer questions of his team or address minor issues as they arose. It was his students who carried much of the load in presenting—a clear indication that Lael is developing a replicable ministry.

The legacy of Robert Traina and his methodical approach to Scripture known as Inductive Bible Study is enduring. Lael is a testament to that reality, and we are seeing its fruit.