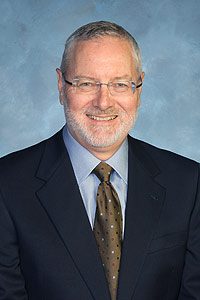 Dr. Michael Peterson, Professor of Philosophy, was recently appointed by Cambridge University Press to be the Series Editor for the forthcoming book series entitled “The Problems of God.” This 50-book series, part of the highly successful Cambridge Elements line, will roll out over the next five years and deal with various ways in which God presents a problem to be explored and grappled with in academia and culture. It will carry volumes on the problem of God in areas such as philosophy, literature, art, film, and Eastern religions, explore cultural and practical issues, as well as the personal journeys of great thinkers and historical figures.

“Asbury Seminary congratulates Dr. Peterson on this outstanding honor,” Dr. Timothy C. Tennent, President of Asbury Seminary, said. “This is a fantastic honor for Dr. Peterson and speaks to the Seminary’s growing strength as an academic institution.”

In spring of 2020, Cambridge University Press asked Dr. Peterson to develop a concept paper for a book series on “The Problem of God.” Starting mid-June of this year, Dr. Peterson will begin inviting and commissioning authors to populate this series.

“My career has been about creating intellectual space for God, theism, Christian theism, and personal faith to be reasonably considered,” Dr. Peterson said. “And I have always felt that I needed to work on secular platforms and publish with major university presses. The ‘Problems of God’ series with a top academic press will be fair to all perspectives, even exhilarating, as it symbolizes that we constantly seek to understand our own humanity in reference to the idea of God.”

Dr. Peterson has authored numerous books, including Reason and Religious Belief (Oxford University Press; 5 editions); God and Evil: An Introduction to the Issues (HarperCollins/Westview); With All Your Mind: A Christian Philosophy of Education (University of Notre Dame Press); Evil and the Christian God (Baker Books); Philosophy of Education:  Issues and Options (InterVarsity Press); Science, Evolution, and Religion: A Debate about Atheism and Theism (with Michael Ruse, Oxford University Press); Biology, Religion, and Philosophy: An Introduction (Cambridge University Press); and C. S. Lewis and the Christian Worldview (Oxford). He has edited Philosophy of Religion: Selected Readings (Oxford 5 editions); Contemporary Debates in Philosophy of Religion (Blackwell of Oxford, 2nd edition); and The Problem of Evil: Selected Readings (Notre Dame, now in 2nd edition). Monotheism, Suffering, and Evil (Cambridge, forthcoming). He has contributed chapters to many reference books and scholarly works as well.