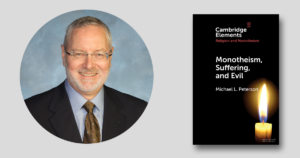 Asbury Seminary congratulates Dr. Michael Peterson, Professor of Philosophy and Religion, on the release of his new book Monotheism, Suffering, and Evil. In this Cambridge University Press book, Dr. Peterson explores the problem of evil and how the three monotheisms of Judaism, Christianity, and Islam respond to the problem of suffering. This work culminates in a recommendation for how monotheism can best respond to the most serious formulation of the problem, the argument from gratuitous evil.

“Why does a loving God allow suffering and evil?” Peterson asked. “I have spent my career working on this issue which challenges rational belief and trusting faith. Simplistic answers damage sufferers and victims, and make Christianity look unrealistic and unreasonable. This volume should assist anyone wanting to compare answers to the challenge of evil in the Abrahamic religious traditions and particularly to get a sense of what Christian responses are most adequate.”

He is General Editor of the Wiley-Blackwell scholarly monograph series “Exploring Philosophy of Religion,” which currently contains five books.  He is currently working on two books: Christian Theism and the Problem of Evil (Wiley-Blackwell Publishers of Oxford, forthcoming) and The Problem of Suffering in the Book of Job. Both of Dr. Peterson’s current Oxford books in philosophy of religion are long-time leading textbooks which are now in fifth editions. He is currently editing “The Problems of God” book series for Cambridge University Press, fifty volumes from experts on important issues and topics related to belief in God. He is currently coediting with Timothy Pawl The Cambridge Companion to Christology, a reference volume of the latest scholarship.