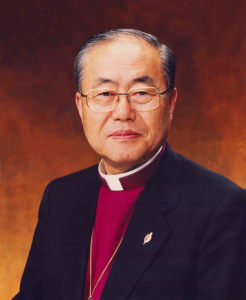 Asbury Theological Seminary announces with great sadness the passing of Bishop Sundo Kim in Seoul, Korea, on Friday, November 25th, 2022, shortly before his 92nd birthday. Bishop Kim originally trained as a medical surgeon in the army of North Korea. During the Korean conflict, he made his way to South Korea and served for some years as a pastor and a chaplain in the South Korean Air Force. In 1971 he became pastor of the 175-member Kwanglim Methodist Church. Today, that great church and its satellite congregations number nearly 100,000 and is the largest Methodist church in the world.

During his long years of service in the church, Bishop Kim served as a member of several boards and agencies in Korea and around the world, including World Vision and the Lausanne Committee. He was president of the World Methodist Council from 1997 to 2001.

In 1993 Asbury Seminary awarded him an honorary degree. He became a member of the Asbury Seminary Board of Trustees in 1996, retiring as Trustee Emeritus in 2018. In 2014, the Board electing him as Honorary Chair, our first international member to be so honored.

Bishop Kim loved Asbury Seminary. He prayed for the Seminary daily. He and his church endowed the Sundo Kim Chair of Evangelism and Practical Theology at Asbury Seminary, which was dedicated in 2005. He also supported scholarships and many Korean students at the Seminary. The single men’s residence at Gallaway Village was named Sundo Kim Hall in his honor.

The relationship between Asbury Seminary and Bishop Sundo Kim and the Kwanglim Methodist Church has been long and deep. Bishop Kim rarely missed one of our Board meetings, making the long journey from Korea to America each time. And Kwanglim Church named Asbury Seminary’s president, Dr. Timothy C. Tennent, as an honorary pastor.

Bishop Kim will be long remembered for his deep prayer life and for his faithfulness to his Lord Jesus Christ and to Asbury Theological Seminary.