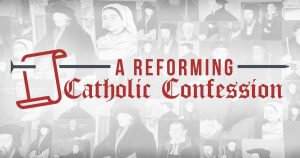 A new Protestant confession commemorating the 500th anniversary of the Reformation and honoring the original vision of the reformers for catholic unity was released Tuesday, September 5.

The Reforming Catholic Confession is an opportunity for Protestants across denominations and around the world to come together in a united gospel-centered witness. The steering and drafting committees believe that despite genuine denominational differences, there is a significant and substantial doctrinal consensus that unites reformational Christians as “mere Protestants.”

“This confession is not a charter for a new church but a tactical commemoration of the unitive Protestantism that characterized the Reformation at its best, a concrete witness to the fact that the theological truths that unite us are deeper and stronger than the doctrines that distinguish us,” said Kevin Vanhoozer, research professor of systematic theology at Trinity Evangelical Divinity School and co-chair of the confession drafting committee.

A 17-member committee drafted the confession, co-led by Vanhoozer and Jerry Walls, scholar in residence and professor of philosophy at Houston Baptist University. The confession’s steering committee was co-chaired by Timothy George, dean of Beeson Divinity School of Samford University, and Timothy Tennent, president of Asbury Theological Seminary. The confession is supported by theologians across many denominations, including Anglican, Baptist, Free Church, Lutheran, Mennonite, Methodist, Nazarene, Pentecostal and Presbyterian. Their hope and prayer is “for ever greater displays of our substantial unity in years to come,” as stated in the confession’s introduction.

“The Reforming Catholic Confession celebrates the many distinctive Protestant voices and contributions to the church, yet also calls us to remember the underlying catholicity and shared faith which strengthens us all,” Tennent said.

“The Protestant Reformation was a clarion call on behalf of the gospel of Jesus Christ, a summons to biblical catholicity,” George said. “500 years later its message of forgiveness and renewal is still urgent.”

Christians around the world are encouraged to read and sign the confession at reformingcatholicconfession.com as an opportunity to unite in a joyful confession of common faith this Reformation year.