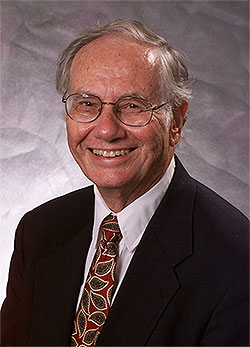 Dr. Donald Demaray, Senior Beeson Professor of Biblical Preaching, Emeritus, at Asbury Theological Seminary, passed away Saturday, October 31, 2015. Visitation will be Thursday, November 5, from 6:00-8:00 p.m. The funeral service will be held Friday, November 6, at 10:30 a.m. All services will be at the Wilmore Free Methodist Church.

On September 10, 2015, Dr. Demaray was diagnosed with a recurrence of pancreatic cancer. He had been in remission for some time. Upon diagnosis he was placed in hospice at Wesley Village in Wilmore, Ky.

Dr. Demaray, or Dr. Don, as he was lovingly called, earned his Ph.D. at Edinburgh University and was awarded a Lit. D. at Los Angeles Pacific College (now Azusa Pacific University). After completing his doctoral work in Edinburgh, Scotland, he began full-time ministry in Seattle. He served first as a youth pastor, then as a professor at Seattle Pacific College (now University). After 14 years, he and his late wife, Kathleen, along with their children Cherith, Elyse and James, moved to Wilmore, Ky.

Kathleen invested 28 years in the Asbury Seminary alumni office. Dr. Demaray served 34 years at the Seminary as dean of students for eight years, professor and mentor. Even in retirement, he continued to teach, speak, write and help seminarians on their spiritual journeys. He has written or edited more than 30 books, which are often used by students at Asbury Seminary.